Well... there goes THAT camping trip!

First of all, let me preface this entire post by saying I'm thankful and lucky that I'm still here and not injured or even worse.  I'm thankful that nobody else was hurt, although looking at the photos afterwards, it could have been really really bad.

Let's back up a few days.

We had been doing days (weeks) of planning.  We had painfully arranged our work schedules.  We had bought the groceries.  We had prepared the dogs for staying in the camper and bought our supplies.  We were ready to take our beautiful Jayco on it's maiden voyage!

We had selected a small Suffolk County Park less than 20 minutes from our home.  We figured this would be a great location in case we forgot anything or needed a certain item for the RV we'd be close enough to home or a store to get it.

The campground itself isn't much to write home about.  A few walking trails.  A scenic pond.  Basic hookups.  Again, not special but a good first weekend out.

Then, on the Tuesday morning before we were to leave (campground reservations were Thursday through Sunday) I was on my way home from work at 8AM on the Southern State Parkway here on Long Island.  For anyone familiar, there are several stretches of this narrow, windy, highway that are always at a standstill.  The road bends left, people stop.  The road bends right, people stop.  A major highway on-ramp dumps a few extra cars onto the right lane, people stop.

So we were stopped.  As I always do, I looked in my rear view to make sure the car behind me stopped as well.  He did.  I was looking off to the side when I heard a very short screech of tires and the sickening sound of two cars colliding.  As I looked up, my truck moved, shook and was slammed into.

It wasn't bad, but I could tell I was definitely going to have a bad morning and that my day was shot.  I drove off the road and was thankful that by the time I had parked on the shoulder and got out the drivers of the two cars behind me were also standing on the road unharmed.  The woman driving the Lexus that caused the whole thing was in hysterics.  She was holding her phone crying.  The poor guy driving the Toyota was just looking at the damage a little stunned.  He was going to feel this one in the morning.

In my pilot uniform (we wear blue shirts where I work), they both thought I was a police officer.  He was afraid that he had hit a cop and she was just plain upset.  She was sobbing while apologizing to us and talking to her husband on said phone.  Right then she then told us she had been texting and didn't notice we were stopped.  That story, of course, changed once the real police showed up.

This is what happens when you run into my Titan. 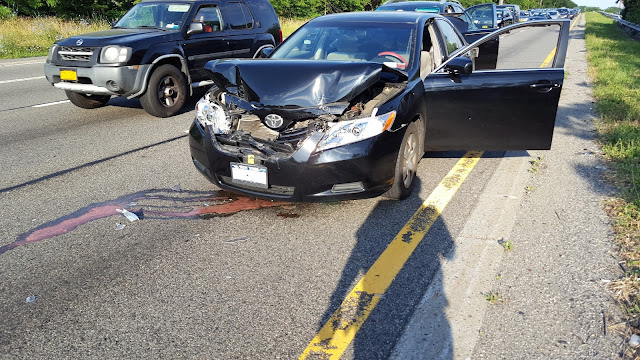 This poor guy got it from both ends.  Through no fault of his own, his car was totalled. 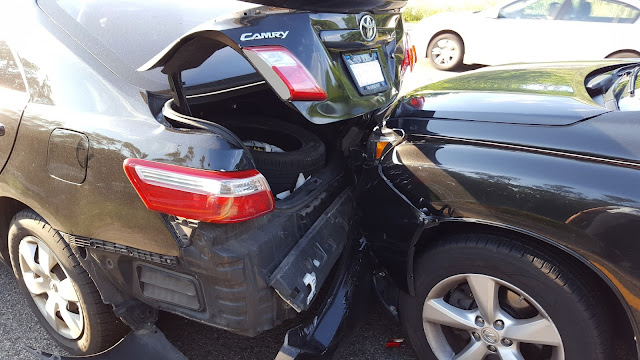 My car had what I originally thought was only superficial damage.  A bent fender, some broken plastic.  Ok, I thought.. a pain in the ass but it could have been much worse.  I could have been in my old Toyota Corolla and that would have been un-driveable.  At least in my Titan the poor guy in the middle went mostly UNDER my car. 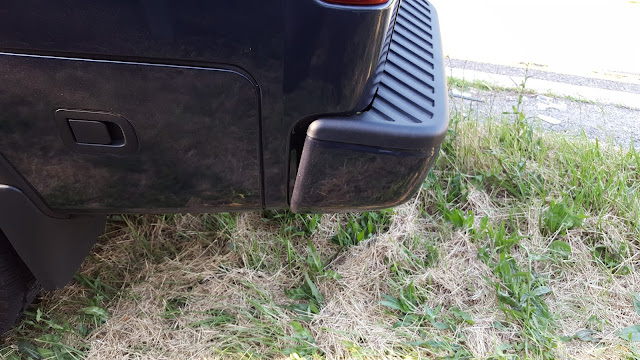 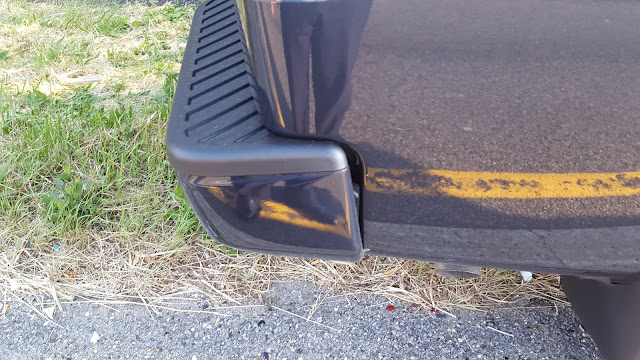 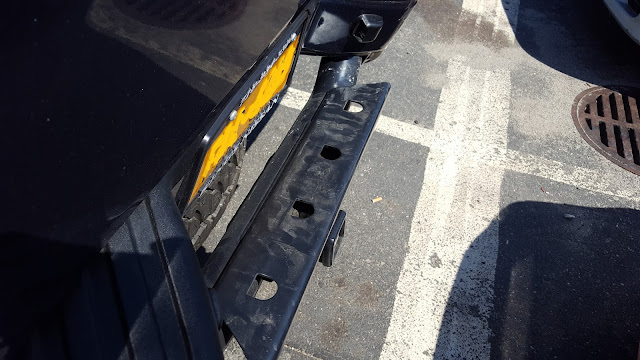 Upon further review, it was a little worse than I thought.  There goes the camping trip and the entire weekend!

My hitch was bent up and inward.  The metal part that houses the 7 pin wiring plug for our trailer brakes and lights was nearly broken off.  The housing for the plug itself was partially embedded into my spare tire.  Worst of all, my little Nissan hitch cover that I was so proud of (it was the first thing I bought after buying the truck) was broken clear in half.  And it's metal! 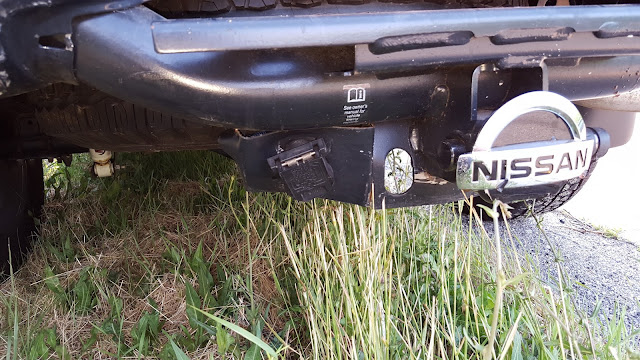 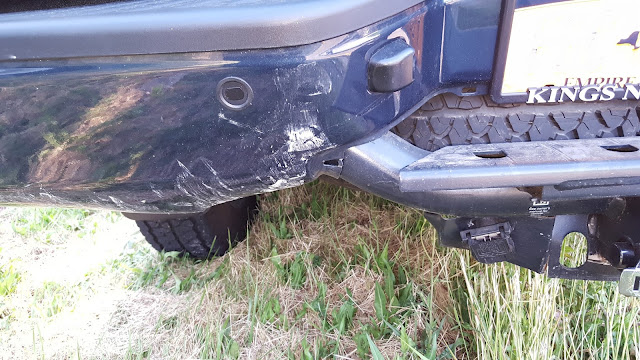 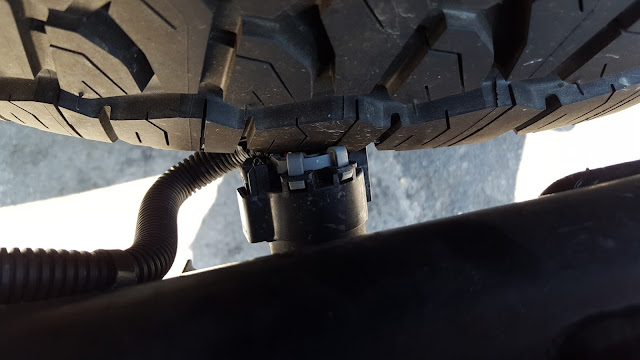 All in all, as I said at the beginning, I'm thankful that it wasn't worse.

So many people get hurt or killed because of texting.

Listen, I'm in my early 30's.  I text just as much - if not more - than anyone other than a 13 year old girl.  It's tempting to text in the car as it's become so natural and instinctive of most any of us to pick up our phone and scroll through social media or texts when we are at a loss for something to do.  I see it all the time at work or in public.  People are fixated on that little device in their hand rather than the world around them, and I'm guilty of it myself.

Please, though, for the sake of everyone and yourself... don't reach for the phone when you're behind the wheel of car!!

It's not even ok in my book to do it stopped at a red light.  So many times people don't go when the light turns green because they have turned to their phone for the 45 seconds they are forced to sit still.  Sitting still used to be a luxury.  What happened to that?

Just don't do it. You may get away with it time-to-time, but you will kill someone eventually.  And if you do, hopefully it's only yourself and not an innocent bystander.

By the way, my car is getting repaired as I type this.  The damage for a rear bumper, new hitch, new plug, and some paint?  $2400.  Thank goodness for good insurance.

Drive safely everybody.
Posted by Jeff Sheldon at 6:31:00 PM No comments:

Did you know that anyone with a fairly new RV most likely has the same keys that you do?  To save money most RV manufacturers now use the same key type for all storage and baggage doors.  Take a look at your key ring and check to see if you have a small silver key that has "CH 751" engraved on the one used to open your storage doors.  If you do, pretty much anyone in your RV Resort or Campground can walk right up and open your storage compartments.

Don't stress too much, though, as most likely you have a different key that opens the doors to your living space and it would take very high odds that someone close by has that same key that would allow them to walk right in during the middle of the night (or while away from your RV!)

You probably also already noticed that the cheap CH-751 keys are very difficult to use and are finicky to the touch.  I can tell you, though, that after swapping my locks out they operate much more smoothly and are very easy to operate.

After reviewing the very helpful Jayco Owners web forum (spend a second on Google, I'm sure they have a message board for your brand of RV,) I went with the company

They have a great website with all sorts of keys, locks, parts and more.  The leading factor that made my mind up was that they carried the same key that I use on our entry door.  This way, I could make my own "Keyed Alike" system (now standard on 2017 Jayco JayFlights) and use the same key for my RV entry door and 3 baggage doors (and the outdoor shower door).

By the way, we ARE NOT  affiliated or getting paid by RVLOCKSANDMORE.  We just purchased from them, they had fast shipping, good products, and we highly recommend their site.

Before you buy, just measure according to the directions on their website to find the appropriate size.  After a few short days, this is what arrived in the mail: 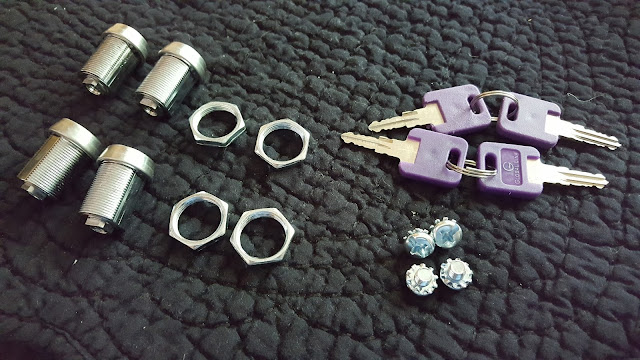 I also went to the other most highly recomended site, CH751.COM and purchased some dust covers for the 4 locks I'll be working on.  I think they look sharp and keep the keys clean.  There's 5 here because they had a deal on shipping if I purchased 5.  I'll find a use for the 5th somewhere. 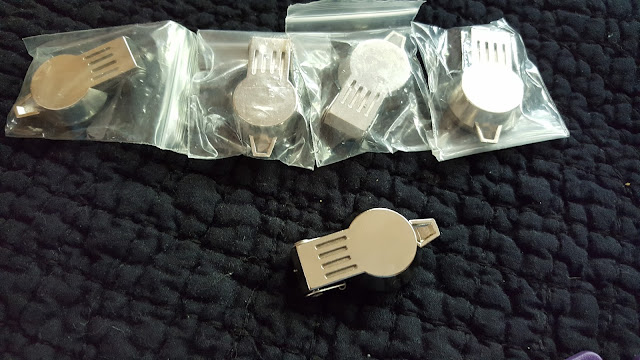 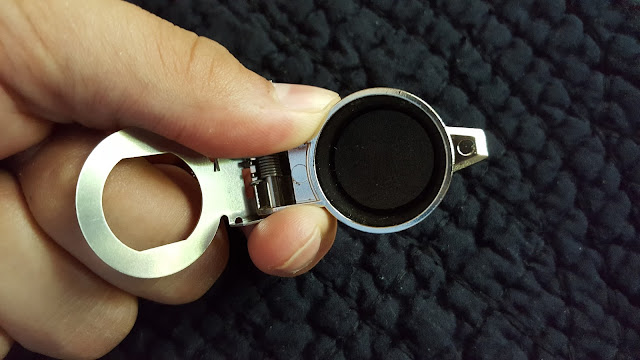 TOOLS REQUIRED FOR THIS TRAILER UPGRADE:  All you need is a Phillips head screwdriver and an adjustable wrench. 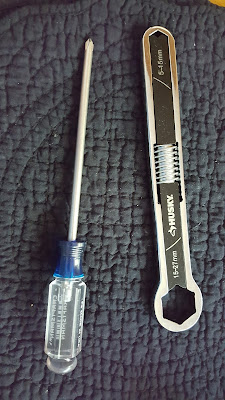 Below you can see the original CH 751 key and lock on our outdoor shower.  It probably looks the same on your trailer or RV. 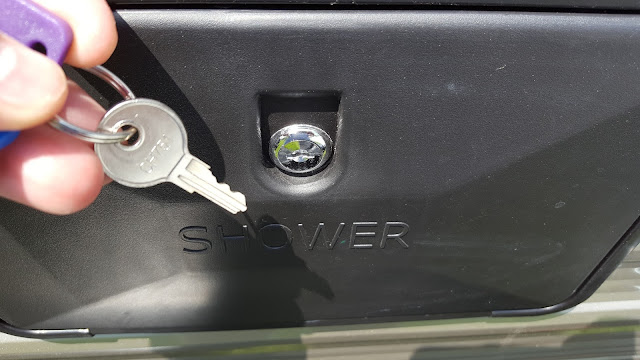 Step One:  Open the door and remove the Phillips head screw that holds the locking tab to the tumbler assembly.  SAVE THE LOCK TAB!  You'll need it later, unless you purchased new ones with your order but the old ones work just fine. 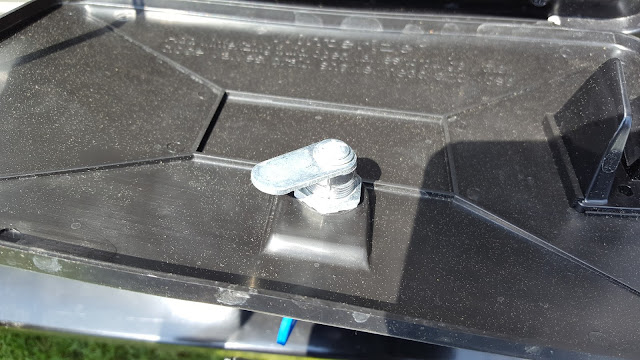 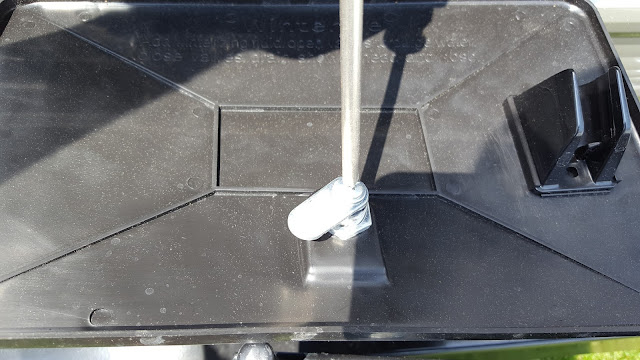 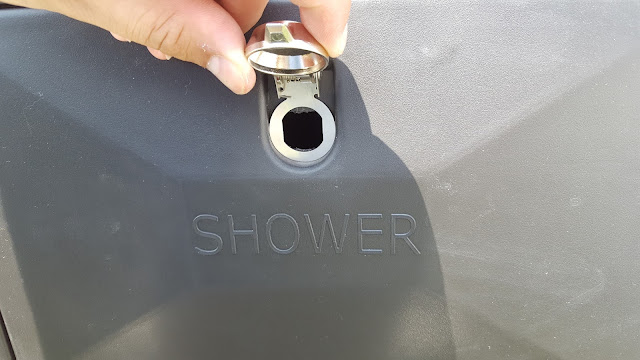 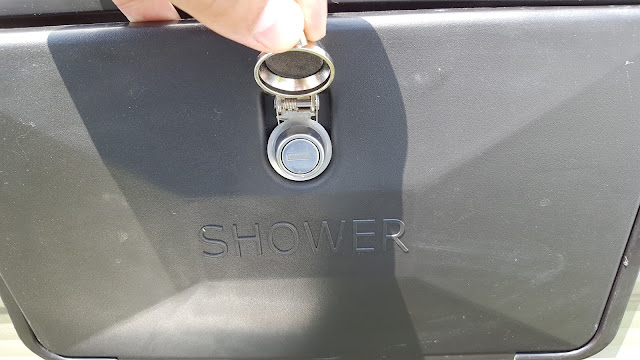 Step Three:  Place the hex washer on the inside of the door and tighten in place.  Then reattach the locking tab as it had been before. 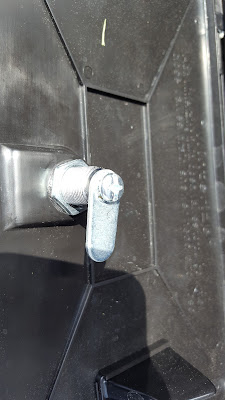 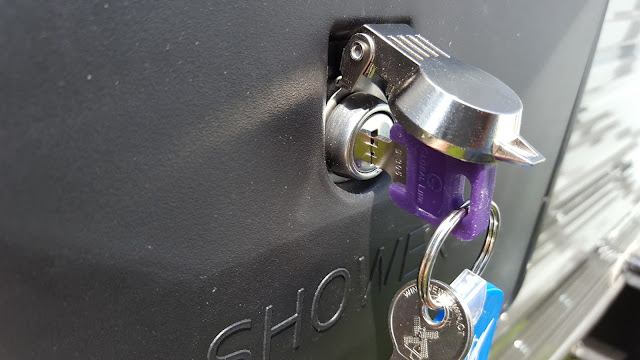 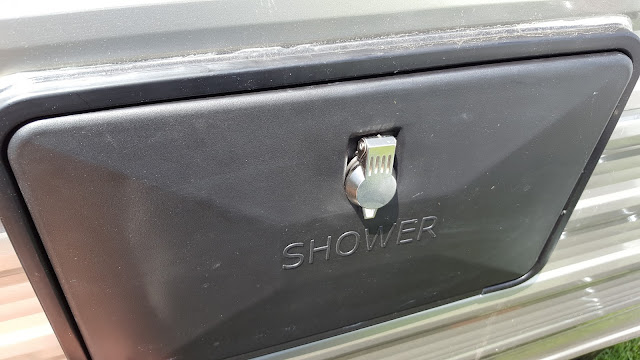 Easy enough, isn't it?  It took me about 25 minutes to complete all four on our Jayco.  Not bad for a little extra protection.  Plus, we like the sleek new look of the dust covers on our doors.  Another very easy and highly recommended trailer upgrade you can do yourself.  Save some money and aggravation of lost or stolen goods!

Liked this post?  Help the blog and share this on social media or tell a friend.  Please click one of our Amazon links and pick up the tools or items required for this mod or click the "Support the Blog" page and go shopping on Amazon.  Each click helps us big time and is no cost to you!  Thanks for reading and Happy Trail(er)s!
Posted by Jeff Sheldon at 2:36:00 PM No comments: