One of the very first things we noticed when we arrived at the dealer after our Jay Flight trailer was delivered was that the kitchen "backsplash" was put on hastily and incorrectly.  It was bubbled and slightly crooked.  We knew it was going to be just a cheap stick on decal, but, little did we know it would look so awful in person. 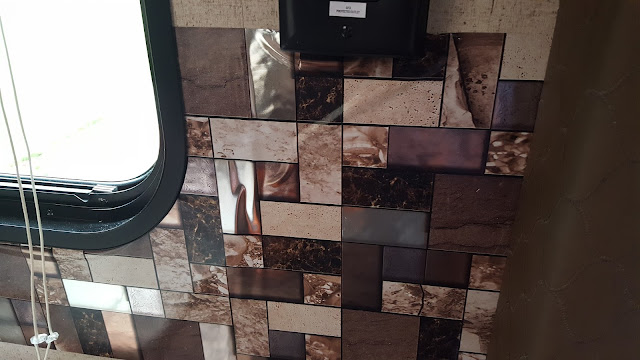 It's the first thing you notice when you enter the trailer.  It's right at eye level as you enter and the bubbles and ripples are easily noticeable.  Easily, this was the thing that upset us the most with Jayco's workmanship.

Granted, if this was the biggest item on our 'squawk list' then we were in pretty good shape!

Since it was so minor, we had opted not to mention it on our PDI (Pre-Delivery Inspection) and I'm sure the technician doing the walk through with us was happy we didn't.  It probably would have just taken a heat gun and a flat edge and smooth out the backsplash, but we already had other plans.

Lauren had been watching one of those "DIY" shows on HGTV and saw someone replace their ugly kitchen backsplash with plastic tiles made to look like tin metal.  It was gorgeous, but best of all, it was easy!

Off to Home Depot I went!

There I found a small selection of choices for designs of 18" x 24" PVC "Decorative Backsplash."
Click HERE to go to Home Depot's website to view what we purchased! 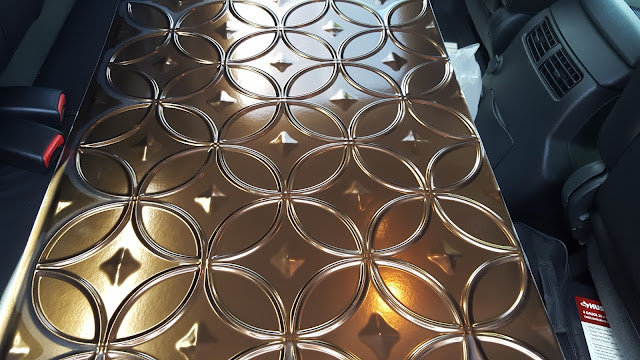 Tools Required:  A tube of "Liquid Nails" or any other construction grade adhesive, a caulk gun, and a pair of scissors!  That's it!  Ok, well, maybe a pencil, straight edge, and a measuring tape, but you probably already have those laying around. 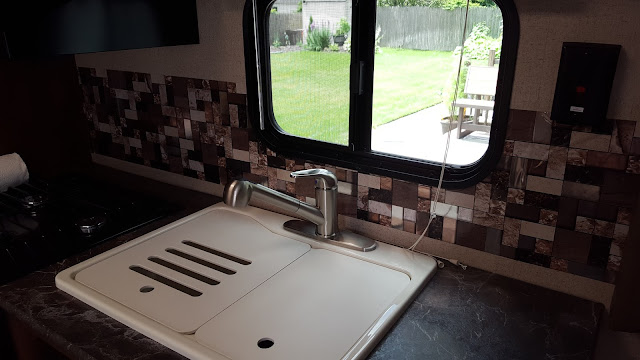 Step Two:  Measure and cut around any obstructions (we had the window and an electrical outlet.)  I made a template using a piece of old cardboard and then cut out the PVC tiles to fit.

Step Three:  Liberally apply construction adhesive to the back of the tile as directed by the brand of tile you purchase.  Press onto wall, hold a few seconds... and voila! 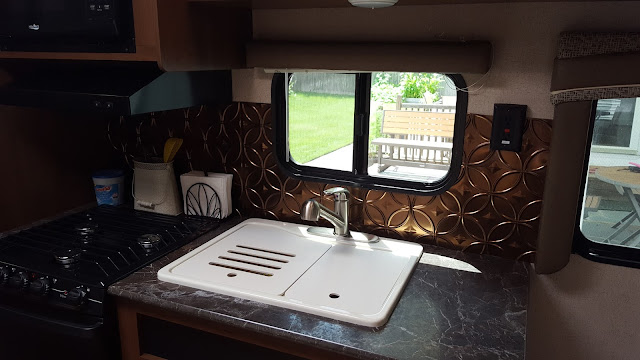 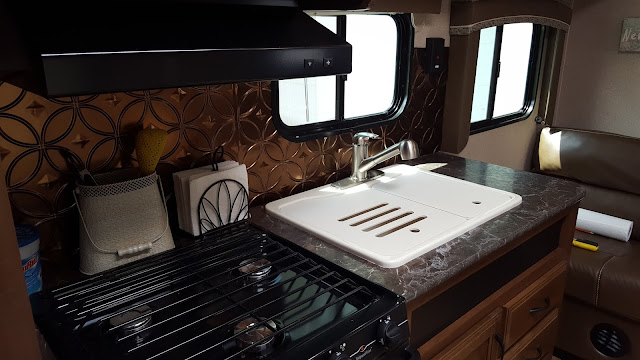 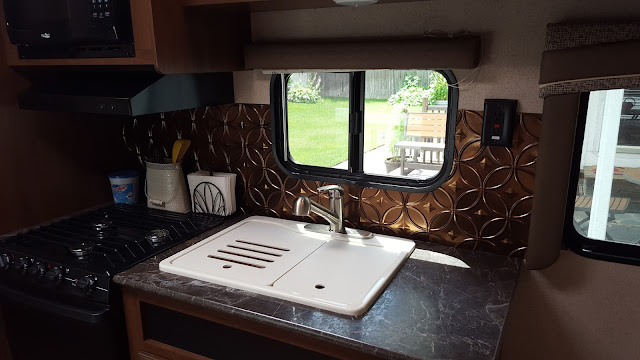 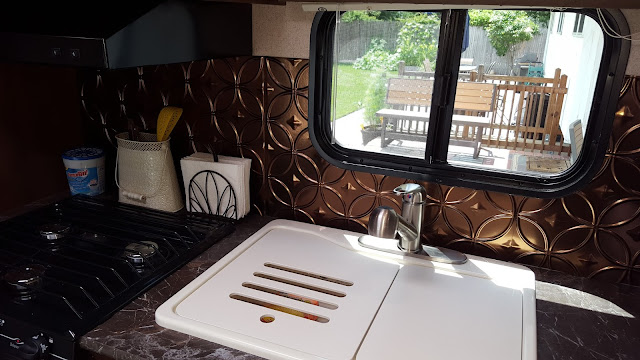 All in all, this is a very easy project that we feel definitely upgraded the look of our trailer.

First Trip Up In Flames (Not really but it sure felt that way!)

As you might have read earlier, we were supposed to have taken our new Jay Flight out for our first "camping trip" (more on that term later) towards the end of June but just days before heading out our Nissan Titan was involved in a 3 car accident and the entire hitch needed replacement.  So, after getting the truck squared away and our reservations re-made, we set out on our maiden voyage this past weekend!

We had chosen a County Park as our first stop with our RV first and foremost because it's literally 12 minutes from our house.  With that short distance in mind, we'd have an easy time finding the campground and had we forgotten anything, we'd be close enough to home to get it.

The good news is, we had an easy time backing into the site, confirmed our belief that most RV'ers are great friendly people, and had an easy time setting up the trailer so that it was level and ready for a weekend outing.   We had been worried about our two little dogs (The Flying Morkies) as they sometimes have a tendency to bark at anything that moves outside of our front window, but, they behaved themselves like really good little dogs and seemed to have a ton of fun exploring the outdoors of the county park! The Flying Morkies working in tandem.

The bad news was by the time we arrived at 6:30PM on Friday evening it was still 95 degrees with high humidity.  At midnight, it was still in the upper 80's with what felt like even higher humidity.

Now, I'm sure some of you are reading this saying:

"So what.. you two are young and that's just a part of camping?!"

Well, that's why at the very beginning of this post I put "camping" in quotations.  Let's discuss the term camping and what people use their RV's for:

Lauren and I are not campers.  We never went out into the woods with a tent and spent a weekend among the wild.  We don't like fishing nor do we like hunting.  We don't like bugs and we don't really like to get too dirty.

We DO however, love the US National Parks system.  We love the South Western desert and the woods and lakes of the North East.  We like the big city (we've grown up close to NYC) and we like the plains of the Mid-West.

We like taking hikes and really long scenic walks, provided they aren't too "rustic."  We do enjoy some physically strenuous activity!  We have climbed the side of the Rock of Gibraltar, hiked up to the top of Beetle Rock at the Sequoia National Forest (no easy feat even with some stairs!) and other exciting and exhilarating things that we realize we are fortunate to have done together.

We've recently heard people use the derogatory term that the US National Parks Service has "Disney-fied" certain parks or monuments.  If that makes us "weak-sauce" RV'ers for liking it... oh well.  We like Disney World and we also like the fact that the government has made most of the National Parks easy access so that nearly anyone can enjoy them.  We look at it no differently than an RV'ing family that sits outside their Class A just to watch a giant TV screen at a tailgate party or those that only take their RV to a NASCAR race to sit on the roof for a good view and have a toilet close by so they don't have to walk so far.  If you like to "camp" in the woods without hookups, away from cellphones and internet, and taking whatever weather and temperatures nature provides you... good for you.  We don't.

Putting it plainly, we are travelers.  As an airline pilot (and pilot's wife) we have traveled the world.  We've traveled this amazing country we get to call home.  We purchased our trailer with the intent of having a permanent hotel room on wheels with our belongings in it with us at all times when traveling.  We purchased it so that we can spend time on OUR schedule rather than an airline's schedule.  So that we can stay as long or as short as WE want, not based on the cost or availability of a hotel room or rental car.

So why did I go through the trouble of that little rant?  It's because we were miserable this weekend, as I suspect most would be with temperatures and humidity so high.  We left the campground and returned home after waking up Saturday morning rather than Sunday afternoon as we had planned.  I mentioned this on a RV'ing message board and it was met with mixed reviews and some not so nice comments about "welcome to camping."

So, I may use the term "camping" interchangeable with using our RV, but trust me when I say, we are not "camping" in the traditional sense of the term.  Also, when people call our Travel Trailer a "Camper" I cringe a little inside.  But that's just me.

I did grow up in a household with parents that REFUSED to use the air conditioning even on the hottest of summer days.  My Mother loved the heat (she's since converted to using central air often now that they spend most of their time in Florida) so as a teenager in high school during summers, it would be routine to have temps in the 90's in my upstairs bedroom at night.  Three fans and a cold washcloth would only do so much to aid in a fitful night's sleep.  Lauren, however, grew up in a home that happily used air conditioning to keep it comfortable... Lucky girl!

I had placed the generator in the truck bed to bring along on our trip before we left so that we could get practice using the generator as a backup power source, but, I wasn't worried because as was described on the "ALL STAYS" app, it was a basic site without water or sewer hookups, but, had electric hook ups provided.  The County Website didn't describe the sites at all, other than by site number, so I took All Stays for it's word.  The campground itself isn't listed on other sites (like my favorite RV-Parky) and Tripadvisor or Yelp reviews didn't mention anything in particular.

The generator and air conditioning had kept the trailer cool until 10pm, but, it quickly rose in temperature and with the windows open and barely non existent breeze it was a long, rough, hot, sticky night.  We felt terrible for our dogs as they just sat panting all night in the heat.


As I previously mentioned, we got up early in the morning, walked the dogs, packed up, and left.  We were back home by 10am cranking our central air and taking a long, cold shower.  Our dogs slept all day.

Our family asked if the trip was a success or did we want to get rid of the trailer already?  I'd say definitely yes, the trip was a success and no I have no intentions of getting rid of the trailer anytime soon (although we HAVE discussed how much easier a Class B would be... if we could only find one big enough to suit our needs).  We received good practice towing the trailer, practice backing into a campsite (with curious eyes of experienced RV'ers watching the newbies for entertainment) setting up camp, having a good cookout meal, and letting our dogs socialize and get used to the Jayco.

Overall, aside from the stifling heat during the night, we truly had a good time.  The campground, aside from not having the advertised power hookups, was clean, comfortable, and very quiet.  The spaces were big, although the roadways were narrow and required driving onto the spot across the way a bit to properly back into my spot.

I'd call this weekend a solid B.  Happy 'camping' everyone!
Posted by Jeff Sheldon at 1:34:00 PM No comments: