Replacing the Factory Vent Fan with a MaxxAir MaxxFan

If you read our post about our first trip you'll remember the trailer was deathly hot during the night and better ventilation would have been MUCH appreciated.  On our subsequent trips, the temperature was better (Lord bless the inventor of air conditioning) but with our big trip out West coming up we wanted maximum venting power for any nights we might spend guests of Campground de Walmart.

The standard stock vent that came with the trailer was 14" x 14" wide but the fan itself was only about 6 inches wide and had one speed... SLOW.  Also, the switch to control the fan and the manual crank to open the vent were located up on the unit itself (over 8 feet in the air) so Lauren needed a step stool to reach them. Thankfully with our MaxxAir II vent cover (read about that here) we could leave the vent open all the time but that still left the need to reach the on/off switch way up on the ceiling.

So we bought ourselves the MaxxAir MaxxFan to help really move some air!  The new fan works so well that that if the main entrance door is slightly ajar it will pull the door completely shut if the fan is on 100% velocity!  That's amazing!

The MaxxFan is the same 14"x 14" size but the fan blades span the whole opening.  It's also easily controlled via remote control (or by the surface mounted control panel.)  I mounted the remote control holder next to the bathroom door so it's within easy reach.   It has variable speed and a rain sensor to open and close the vent should rain start out of nowhere.

My big mistake (there's always one!) was not to research this enough beforehand when I spent the money on the original MaxxAir cover from the previously mentioned blog post.

It does not fit with this new fan, nor would it allow enough airflow if I somehow squished it down on top.

So, while the original cover did serve us well on the trips we have already taken and allowed us to keep the trailer ventilated while it sat in our backyard, I now had to spend money and buy a new vent cover, the MaxxAir Fan Mate with EZ Clip Hardware.  I suppose if we had the money to purchase the MaxxFan first I would have known better.  Oh well, I'll chalk it up to a learning curve.

My other mistake (more for you folks than myself) was that halfway through this installation I got into the groove and forgot to keep taking photos... Sorry!  I'll do my best to describe the steps.

You'll need some tools.  I used my drill gun with Phillips Head screw drill bit, a dull edged flat blade to scrape off the old sealant, Dicor Lap Sealant, and some Eternabond tape (I just love this stuff!).  I needed a small wrench to remove the nuts on the old vent cover, but you might not need that.  That's really about it!

Step One:  I removed the old vent cover.  One side of the cover just used large Cotter pins to hold it in place so they slid out easily.  I then removed the old brackets using the drill and wrench. 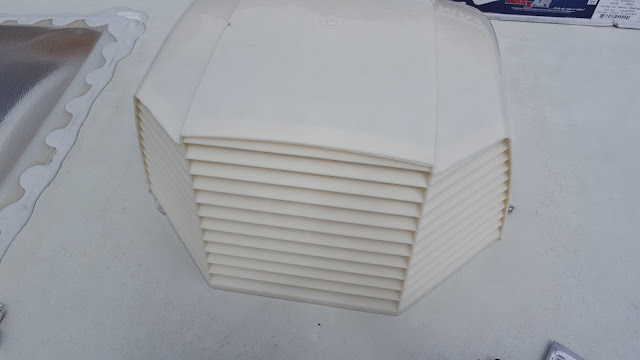 STEP TWO:  I carefully removed the original sealant around the vent fan to expose the screws holding it to the roof.  There is about 6 or 7 screws per side that need to be removed.  Be sure to be careful not to puncture your roof during this step! 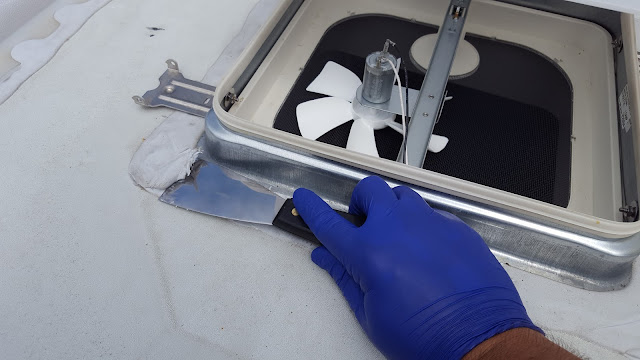 Carefully scraping sealant away.
Notice how small the actual fan is compared to the size of the vent. 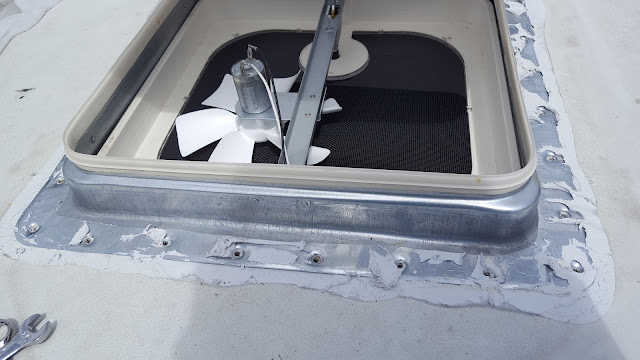 The screws have been removed.

STEP THREE:  After disconnecting the electricity to the entire trailer, I disconnected the wire clip that connected the trailer's 12 volt DC power to the fan.  Back up on the roof, I used the same flat edge to carefully pry up the fan away from the roof. 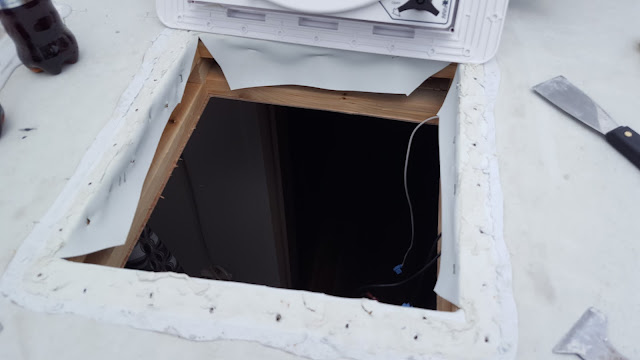 Before the new fan was installed I finished removing all traces of the old sealant that might prevent a tight seal later.

STEP FOUR:  I used this opportunity to tighten the rubber roof lining as I had loosened it slightly by pulling the old vent off the roof.  I removed the original staples that held the roof lining to the inside of the vent opening, pulled it tight, and then used my staple gun to keep them securely in place.  I also cleaned the roof completely of any old sealant before seating the new fan. 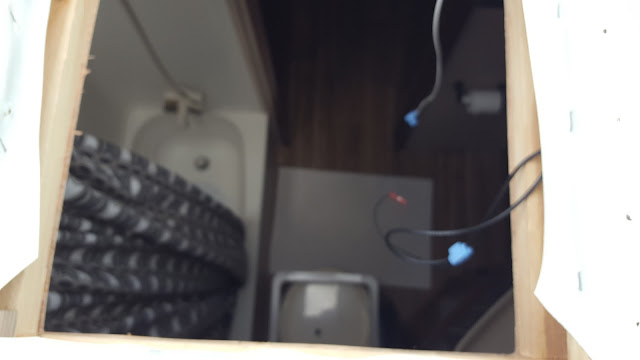 Looking down into our bathroom.  You can see the positive wires coming in off the right.  The blue clip is a factory installed connection to another short positive line that dead ends and is capped off in the event the customer wants to install a better vent fan they can easily tie into the trailer's electrical system.  I guess they realize the factory fan sucks but that's a post for another day.

STEP FIVE:  I seated the new fan properly and went into the trailer to connect the electrical hookups.  The MaxxFan comes with two insulated connectors that easily screw on to the provided negative and positive lines.  As I mentioned above, Jayco provides easy connections should you want to install a new vent fan.  Black to black and white to white and I was finished in a quick minute.  Some electrical tape to make sure the insulated connectors were protected and I tucked the wires back into their little insulation filled cubby on the side of the vent opening.

STEP SIX:  Back on the roof, I used the provided screws to fasten the fan to the roof.  The MaxxFan is plastic and rather than include pre-drilled holes that might weaken over time, it has dimples along the edge to show you wear to screw.  That way, screwing through these dimples tightens the grip on the fan as the screw goes through the outer flange.

STEP SEVEN:  WATER PROTECTION!  I used ample amounts of Dicor Self Leveling Lap Sealant around the edge and over any screw heads to prevent water intrusion. The fan is installed and the trim is replaced around the inside of the fan.  Notice the size difference in the fan blades compared to our old one!

STEP EIGHT:  Back inside, I installed the trim piece around the unit and attached the holder clip for the remote control next to the door for easy use. 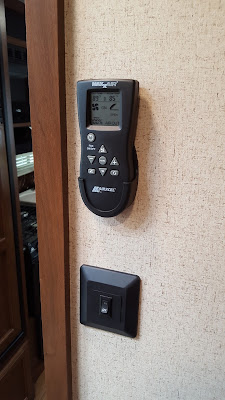 The remote installed above the light switch. 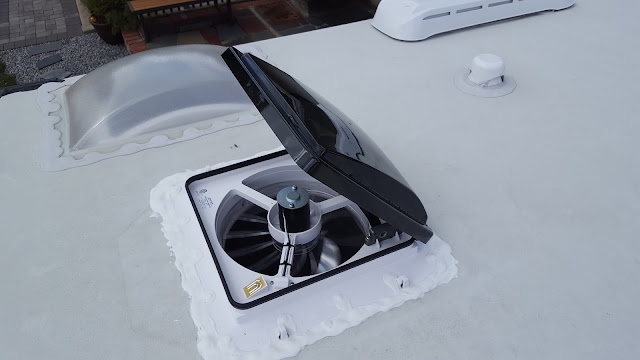 The finished product on the roof. 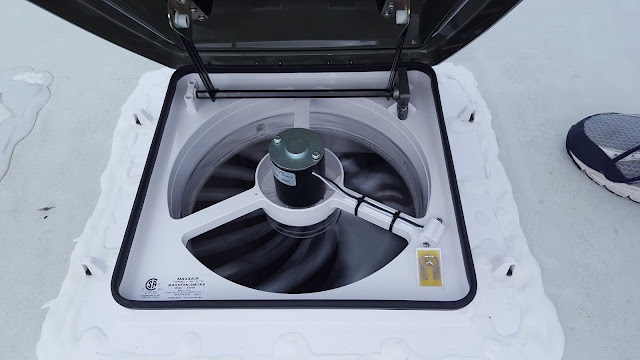 The two clips on each side made installing the new vent cover a breeze.  No screwing or bolting clips into place required; just 4 quick connect Cotter pins hold the MaxxAir FanMate cover in place.

STEP NINE:  I used my EternaBond Roof Repair Tape to create an additional seal around the new fan.  The next day once the Dicor had dried, I wrapped the area in the very sticky tape to create a guaranteed waterproof seal.  Plus, I think it looks much better having the nice straight lines of the tape. 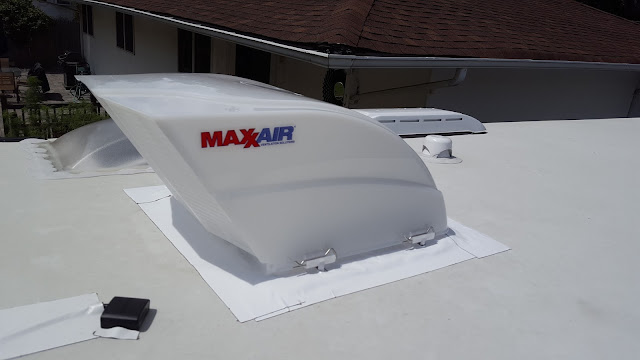 It also has reverse direction capability so it can pull air in as well as expel air out of the trailer.  Variable speeds, rain sensor, remote control, and volume of air movement all make this "Trailer Upgrade" very worthwhile.

All in all, it was a fairly simple task to complete.  MaxxAir provides detailed instructions and the tools required most people have laying around the garage.  While this upgrade was fairly expensive (about $150 for the fan) and the new cover (about $65), we feel it will be a great help in allowing us to use our trailer off grid without the need to run a noisy generator for air conditioning on those warmer days.